Greenville, SC to Atlanta
I took sort of a "heat vacation" day, only traveling down to Atlanta, since it was in the mid 90's. During the day I took a little trip to a service station where I added air to the tires and checked the oil, which was a little low. The MP3 takes 5W-40 weight oil, which no service stations seem to carry.
I also went to a bike shop to look for some butt-pain relief. I was going to get some padded bicycle shorts, which turned out to cost $129. Uh...no. I went next door to a camping store and bought. a square of foam used as a makeshift camping seat. I can fold it so that it will fit above the AirHawk. It might not be perfect but it will give the seat a different crotch-profile and who doesn't like that?  Plus it fits perfectly in the Givi top-case as a bed-liner. 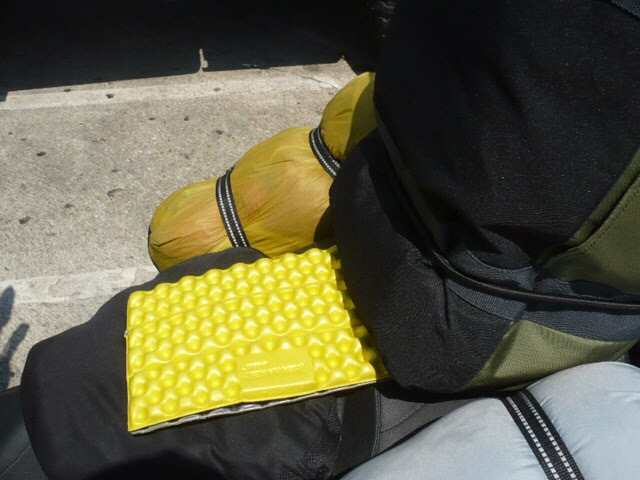 I thought it would be fun to go play some Par 3 golf in Greenville, at this course, I think it was called "Crosswinds", where each hole was designed by a different golf pro. I haven't played golf in a long time but it was pretty cheap and looked fun.
It was hard to find the ACTUAL ENTRANCE to the golf course but I finally did. I brought a motorcycle glove to use as a golf glove. When I went in the clubhouse, the manager asked me if I had a t-shirt. I was wearing a synthetic wicking tank top. I didn't have a t-shirt and he didn't sell them, so I decided to go back to the "Sleep Inn" (a misnomer by East Village standards since checkout time is at the ungodly hour of 11 a.m.) and get a t-shirt.
As I walked back to the scooter in the parking lot, though, I saw waves of shimmering heat on the grass. The sun was baking everything and I felt like I was about to hear a swarm of locusts descend. It was ungodly hot and there were almost no people on the course. I decided then "Hell no" and went to the hotel.
Hadn't eaten anything since the "make your own waffle" continental breakfast, so I went out walking in search of food. The only place open was a Domino's pizza, so I got a small pizza and brought it back to my room. I watched airplane pylon racing on t.v., now there is a sport for adrenalin junkies. It's super-cool to see those planes filmed in slo-mo where you can see the actual rotation of the propellers.
Still frickin' hot out but I had the seat cover on to keep the seat cool: These make it so you don't turn your butt into the "Make your own waffle".
I took a shower and when I got out I looked at all the crap I had to pack on the bike and thought "ugh, so much fucking with diddlyshit before I can get going" but once you actually start doing it, it's not that bad.
The manager, Sharly, took a photo of me before I left: 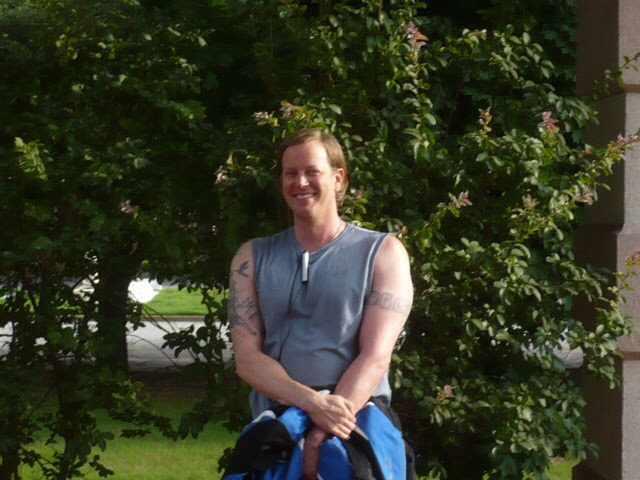 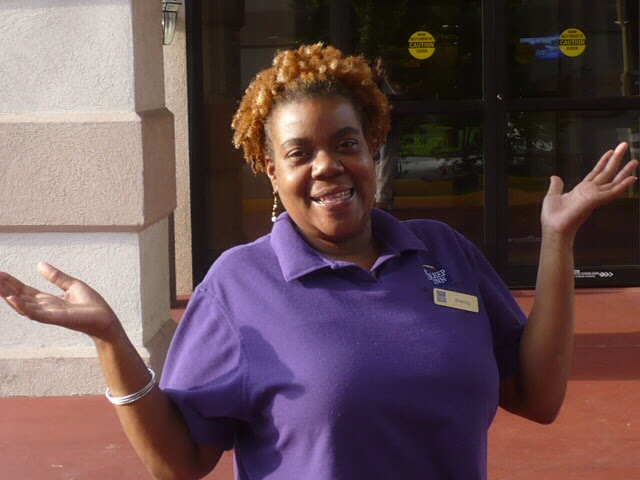 Another interesting name I came across on this trip was a woman working at a roadside Subway named "Tasada".
I hit the road and raced the great midsummer sun into Atlanta. When I got there darkness had almost fallen and I got hit with two mini-thundershowers. I hate riding in the rain,. I was on an 8 lane highway with tractor trailers blowing by, and that just gets me into cortisol-country fast.
I made it to my friend Kelly's house, struggled through swarms of Japanese beetles and then met her girlfriend Heather and their cats and dogs. One doggie, Rex, is a bit of an overprotector and has snapped and some people but I felt a bond with him right away. When I went to bed I thought about how nice it would be to have a loyal dog near you, lying there, protecting you if anything should happen, and how nice they are to come home to. Really made me want to have a dog.
- Posted using BlogPress from my iPad
Posted by archeopterix at 4:55 PM