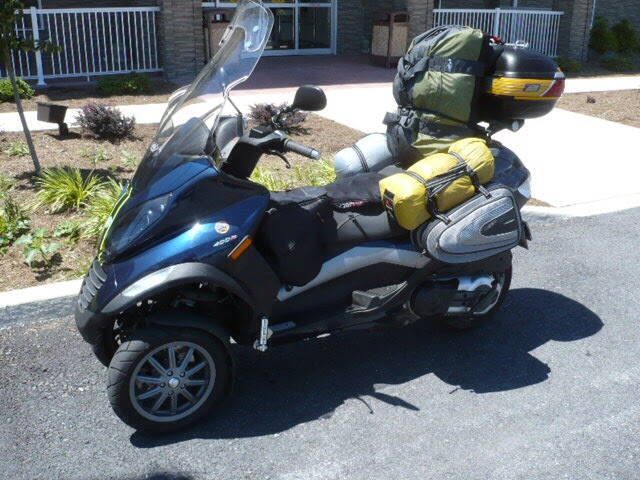 The day I left I got underway later than I wanted to. I first made a quick trip over to the FDNY store to get some police and fire stickers to put on the bike to show my patriotism and so Southern State troopers would be less likely to make a human barbecue of me ("To Serve Man").
Packing the scoot took a long time because I live in a 5th floor walkup and had to make trips up and down the stairs, praying each time that the guys at the Sockman store (Hey Jeff) and the tattoo shop downstairs would stop passers-by from removing my belongings from the bike.
When I install anything I try to make it so things will last 1000 years (see William Burroughs "Old Bull" character in "On the Road") and I didn't like how the saddlebags were secured only be a small contact patch of velcro, so I used the cinching straps that came with the bags to instead attach them to the handles of the MP3 400. Last year I took the saddlebags to a shoe repair place and had them attach extra straps to the top to tie down my sleeping bag and tent. 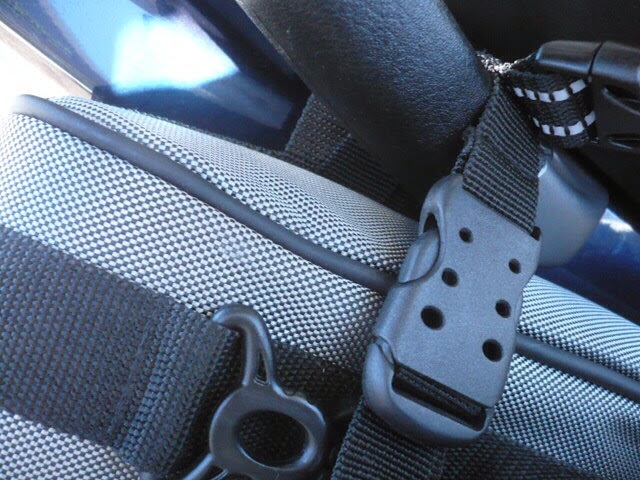 The straps are reflective so that goes along with my "hi-viz" philosophy of life.
I packed soft stuff like clothes and my Big Agnes pad in an American Eagle mid-sized duffle which I secured to the bike using carabiner bungees. 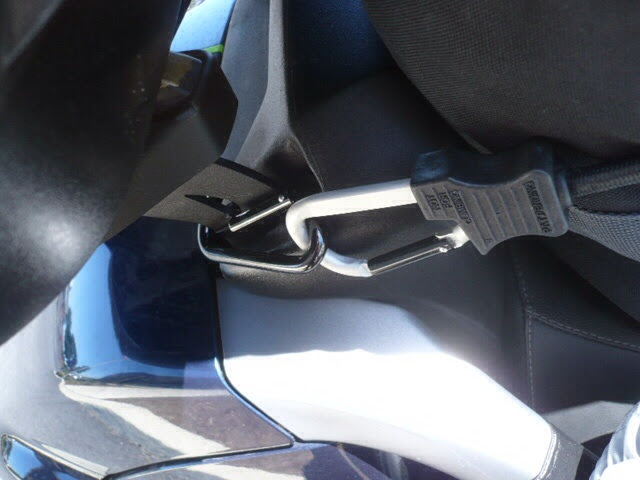 I'm categorically against the use of open-hook bungee cords, I think they are an Isadora Duncan accident waiting to happen. If something slips you know they are going to take out an eye.
I like American Eagle bags because they have rugged zippers and hardware. The "D" rings are metal. I used a quick-release strap to attach the D-ring to the mounting brackets I had installed on my Givi top-case. The mounting brackets are really drawer-pulls from Home Depot, with fender washers underneath and on top to add strength. I doubled the strap around a braided wire tie-down I had installed, that way there was a little "give" which would protect the brackets. 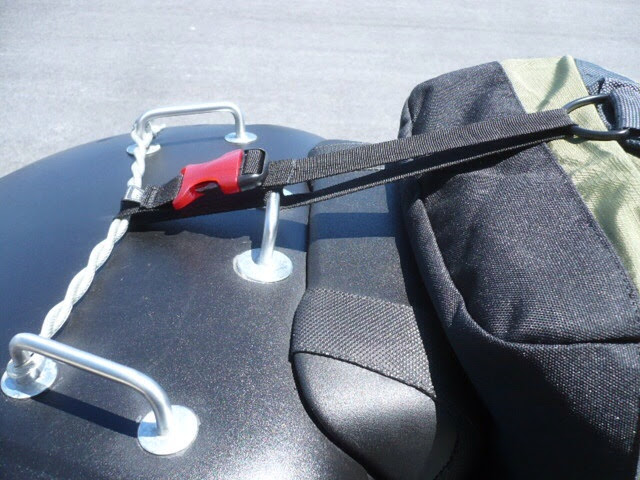 Disembarkation
It took a long time to get out of NYC because it's NYC. I decided to take Route 22 West through NJ and into Pennsylvania. This turned out to be a mistake because Route 22 iin New Jersey is a giant strip mall with tons of traffic lights. For navigation I initially tried to use my iPad in a clear waterproof case attached to my tunnel bag, like a living map case, but it was impossible to see it with the glare, and I wasn't crazy about the constant risk of fiery instant death from looking down at the thing. Later I switched to my trusty way-overpriced Garmin Zumo which has a mind of it's own.
I finally got up to speed in Pennsylvania. At this point I was fairly drained. The sun was setting and I was behind schedule. I don't like to ride at night because I see "flares" when I look at lights due to LASIK surgery (which I still recommend). It started getting colder, even with the liner installed in my mesh jacket, especially where the road would dip down into valleys. I knew I wasn't going to make it to my destination, so I pulled off the road near Hershey and stayed at a "Main Stay" in. It was around 9:30 and the only food I could rustle up was take-out pizza. Everything closes early in Hershey so the Oompa Loompas can get some rest I was glad to warm up and turn off my "executive function" for awhile. I had had crippling nsomnia the night before and was tired.
- Posted using BlogPress from my iPad