I didn't think the last leg would be that tough, but the driving was just miserable. I faced traffic around Wilmington, Philadelphia, Trenton and NYC. My strategy was to take side roads around the major cities. This worked for the most part, but in New Jersey my Garmin took me to U.S. 1, which was an interminable  series of stoplights and shopping malls. This is my second-most hated type of driving, the first being high-speed-road-work-exit-a-gogo: those stretches of Interstate with tons of merging traffic and 25 mph exits one after the next.
In Maryland I had started out on the Pulaski highway. I learned that is was based on the old "National Road" which was one of the first interstates, and prior to that had been Indian footpaths. How cool. But now it was just Staples' and Best Buys. On the whole it is hard to find originality without really going off the beaten path.
I made it to New Jersey and found a gas station. A guy walked up to me and looked at the bike and didn't say anything. I said "How are ya'? all friendly-like. He didn't say anything. Later I found out he was the gas attendant, which are required in New Jersey.
Finally I came within striking distance of the Emerald City (yes I know they call Seattle that). 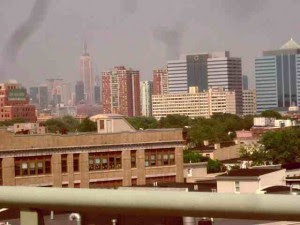 I did NOT hear the Wizard of Oz song "You're out of the woods" which is THE most optimistic song in the world. No, because after miles of stinky New Jersey strip mall roads, I was in the line from Hell waiting to get into the Holland Tunnel: 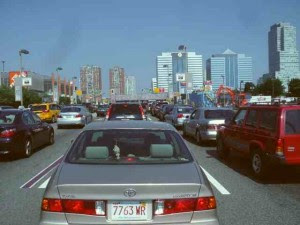 These photos look a little weird because I accidentally had set my cameral to "macro" and was taking photos from the bike - something I do not recommend at high speeds.  I read a recent trip report from someone who had dropped their camera on the highway and ruined it while trying to do this.
There was a time in Georgia where traffic was backed up on the Interstate. Everyone stayed in line and nobody used the clear right lane to jump up to the front of the line. Not so in NYC. Lots of people tried to sneak up by riding on the shoulder and cutting in. When someone tried to do that to me I asked him "What do you think you are doing?" I was getting pissed off: I had been cooking in the heat for over and hour and this guy just zooms up in his air conditioned car and wants a free pass.  Not gonna happen.  I felt like screaming a rebel yell (like my friend Ken Cushman) and kicking in his windshield.  The heat does strange things to you.
I finally made it to the toll gate, paid my $8, and the scooter died. I was just about to enter the tunnel. The police saw and motioned me over to the side. They said that there are hellacious fines if I stall out in the tunnel and I should let the bike cool down, which I did. 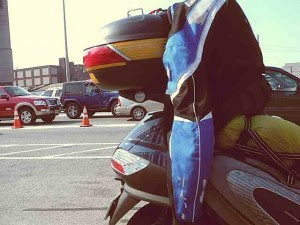 The bike had performed flawlessly all the way to Savannah and back, so I was worried there was something really wrong. A dashboard indicator for oil and one that looked like a drive belt came on. Great.
The cop asked me if I was "on a job", which I heard as "do you want a job?" so I said "yes", since I was having CSI thoughts and I am alienated from my computer job. He probably asked me this because my license plate is ROBOCP. I told him I was not a cop, just liked the movie. I was worried because I was carrying two small containers of camping propane and a pony bottle of gas for the MP3's diminutive gas tank.  It's illegal to carry them through the tunnel.  I sat by the side of the tunnel, found some shade and just tried to "roll with it", which is my motto on trips.
When the bike cooled I checked the oil, it was OK, I looked in the owners manual: the dashboard indicator that looks like a drive belt means it's tim to change your drive belt. In fact I had driven enough that I was 237 miles past the scheduled 6000 mile service, which is a major operation.
I white-knuckled it through the Holland Tunnel and made it out the other side. That is one long tunnel NYC streets were fucked up and closed off with street fairs and repairs,  but I made it home. Yes! My own comfortable bed, a shower with good water pressure, peace and quiet. To mark my arrival I had an IPA beer: I hadn't had any alcohol on my entire journey because I was always somewhere where I had to get on the bike (ed.  this is wrong since I had a beer in Arlington with Jim). I had a great trip, and hope to have more: 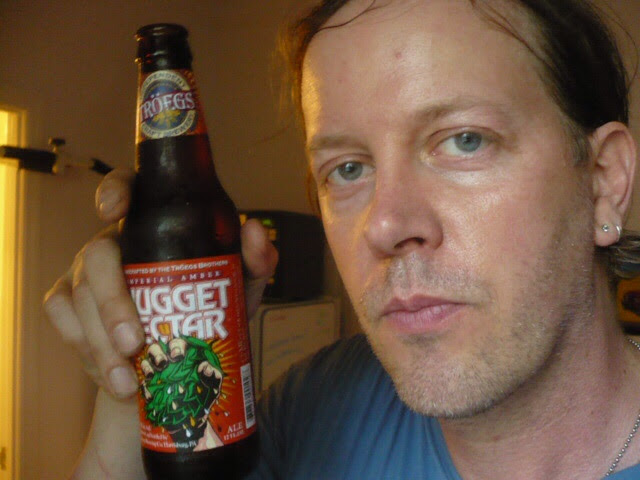 - Posted using BlogPress from my iPad
Posted by archeopterix at 4:50 PM