I hit the road the next day, sorry to leave Kelly and Heather and their menagerie, but ready for more adventure: 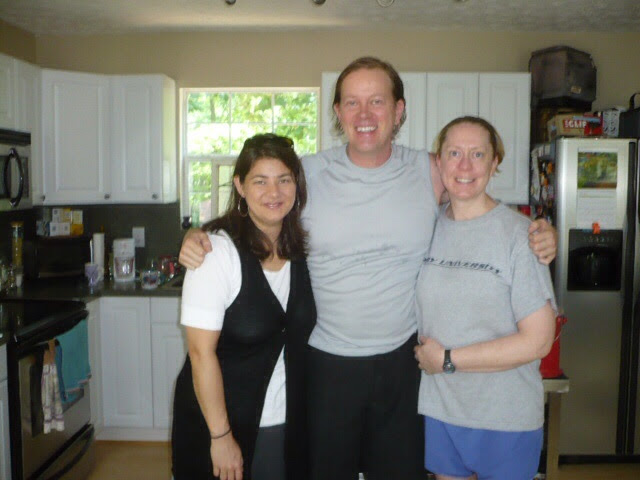 I was very sorry to leave my new buddy Rex: 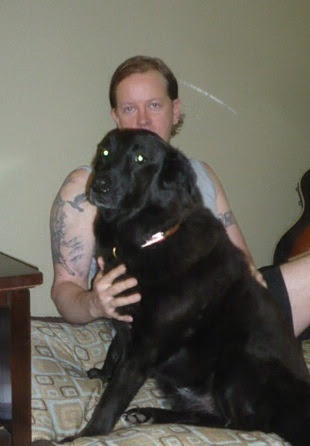 I was going to take smaller roads out of Atlanta but that was a mistake, since 30 miles later I was still hitting generic suburban strip malls. I got on 85S to make some time.
It was hot and the temperature kept going up. I took a photo of my onboard temperature gauge (thermometer?) at 104 F, eventually it went up to 112 F. It was 100 degrees in Macon, which I passed through. Eventually I had to stop for a bit to get out of the heat.
I stopped at a rest stop and soaked my evaporative vest in water in it's plastic bag. I also bought some boiled peanuts. The concept of boiled peanuts eludes me. Imagine if you are having a dinner party and boiling some pasta. You are trying to create a saloon-type atmosphere so you bring your guests a basket of unshelled peanuts as an appetizer. Only on the way from the kitchen you slip and dump them into the pot of boiling water. Peanuts ruined right? WRONG. Peanuts now a delicacy according to Southern cuisine.
I bought a small bucket of them and ate them while drinking my rehydration beverage of choice, Powerade (probably has the most HFC). They were soggy and mealy and dripping. This service station had flies, so flies kept landing on me. I looked down at the plastic bag with my evaporative vest soaking in it, and it was leaking all over the floor. Then I realized that the Ethopian food I had the night before was talking back to me. Specifically it had Haile Sellasie's voice and was saying "fuck you colonist". Or, in several seconds, "fuck you colon-ist". Good times.
I got it together, took care of bid-ness and got a plastic grocery bag for the vest. Hit the road. Temps kept going up. I stopped again and wet a kerchief and put it around my neck. At one point I stopped just to reverse the evaporative vest: 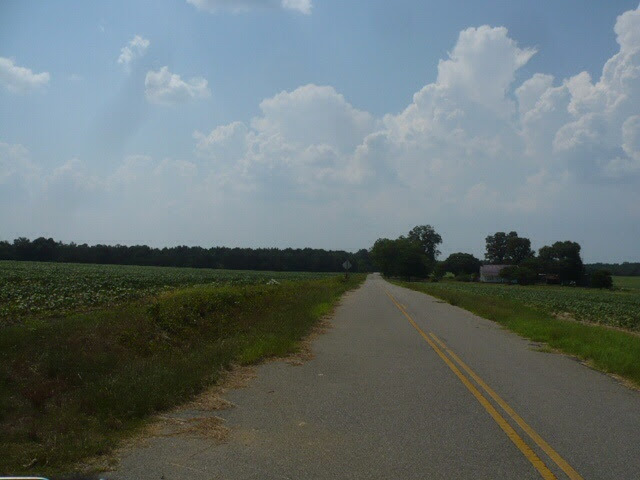 You have no idea how hot it is on that country road.
When I stop I try to keep the bike in view because I can't completely unpack for every stop:

(just out of the picture, the devil running away lifting his feet off the pavement going "Ow! Ow! Ow!).
Getting closer to Savannah I hit a little service station with a "petting zoo". Basically they have some animals out in a pasture behind the station and you can buy corn to feed them. I didn't want to buy corn, so the animals didn't come over to me. Two women stopped by with corn, but they were afraid to feed the emu (I think that's what this is): 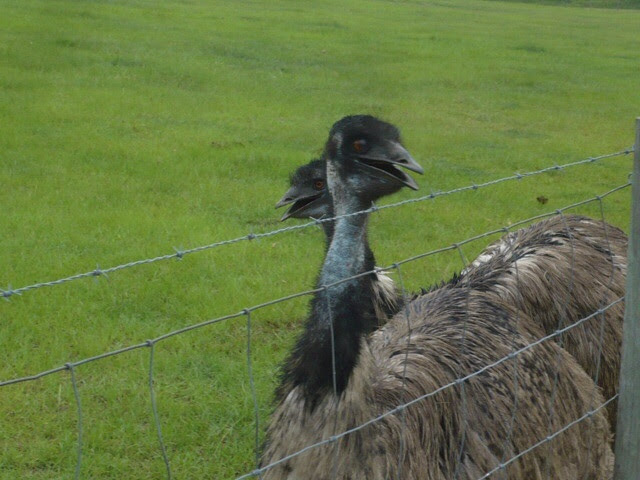 You can't really see it from this photo, but this is a mean-looking fucker. I offered to feed it using my motorcycle glove to test how bad this thing would peck. Answer: BAD. This guy pecked the shit out of my hand when I fed it, I was glad I had the glove on.
Some other cuter animals moseyed over and they fed those: 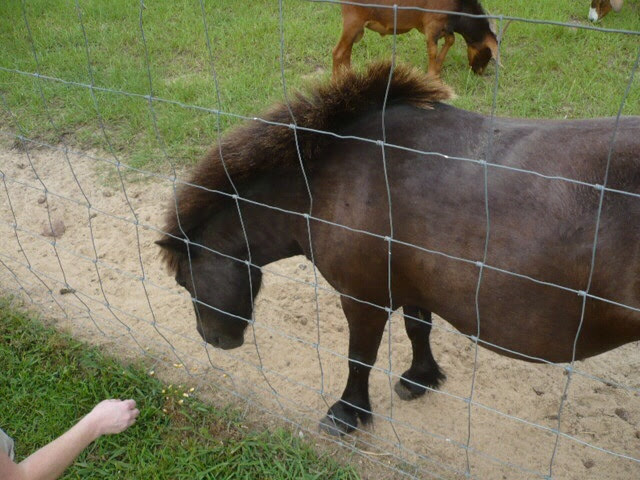 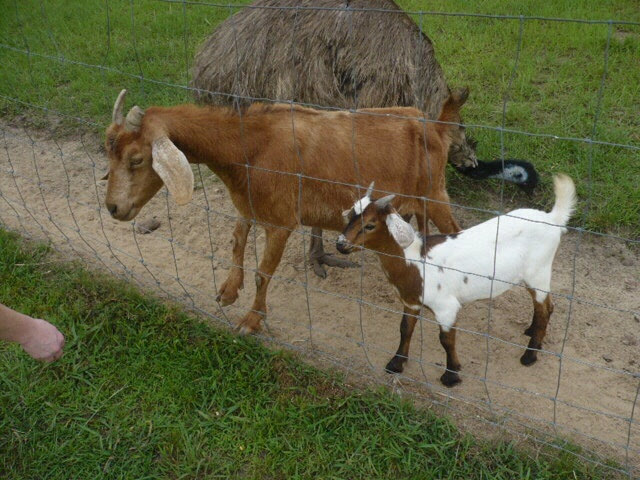 At the service station the guy told me that this county was under severe thunderstorm warning until 7pm. I decided that I would ride anyway and if it started to rain just pull over.
Of course it started to pour, but I drove through two storms. No lightning so I wasn't that scared, and I sure as heck wasn't cold.
I pulled into Savannah into a sketchy neighborhood. It seemed darker out, like the sun sets earlier here. The streets were canopied with trees hanging with Spanish Moss, which gave a nice creepy effect. For the second time that day I got panhandled by someone pretending to be interested in the bike.
I rode on to a bar with a 10' snooker table, but I was too exhausted to do anything but find a hotel and crash. I did not want to ride the bike anymore that day so I walked a long way to a KFC. It seems that the KFC portions down here in Savannah are bigger than in South Carolina.
I cranked up the AC in my room and watched the Celtics get crushed by the Lakers.
- Posted using BlogPress from my iPad
Posted by archeopterix at 4:54 PM