Hershey PA to Arlington, VA via Gettysburg
Before the advent of Starbucks excellent "Via" instant coffee packets I purchased a bunch of packets of Java Juice, an organic liquid instant coffee. Fortunately I don't think it goes bad, so I was able to forego figuring out the tiny in-room hotel coffeemaker in favor of Java Juice. 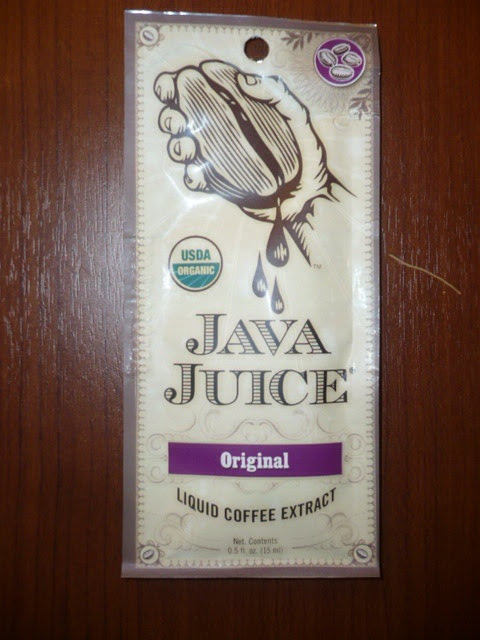 I got some milk at the Contental breakfast thing and made oatmeal, which I had brought with me. Down by the hotel bar was a framed "Mr. Goodbar" wrapper from days gone by: 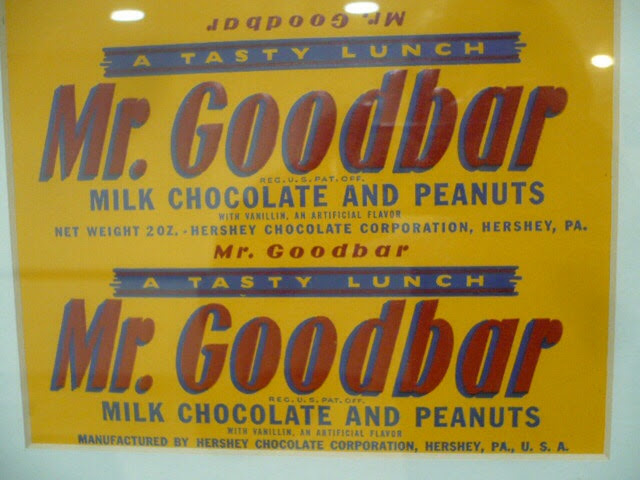 That was from the days before they used big seams in the packaging to shrink down the actual size of the contents. Probably cost a nickel too...
The night before I was hoping that there would be an NBA Finals game on t.v. but it was a night off for them. It's a very good series that could go either way and Rajman Rondo guy is exciting to watch.
I set out in search of Gilleys bar, not the one from Urban Cowboy, but a bowling alley near Gettysburg that features duckpin bowling. On the way I hit a stretch of road that had almost no gas stations. Because the scooter has a 3-gallon tank I have to be vigilant. For almost 30 miles I could find no gas stations. WTF?
I finally pulled into a garage on a side road and asked a guy who had his head under a car hood. He didn't raise his head, and barely replied that there were no nearby gas stations nearby and I would have to get back on the highway going the other way. I secretly wondered if he had social anxiety. In my mind I walked up to him and poked him in the chest while saying "Hey Bub, if anybody's gonna have social anxiety around here it's going to be ME!"
I wandered back to the scooter and took some pictures of a wrecked school bus in the lot: 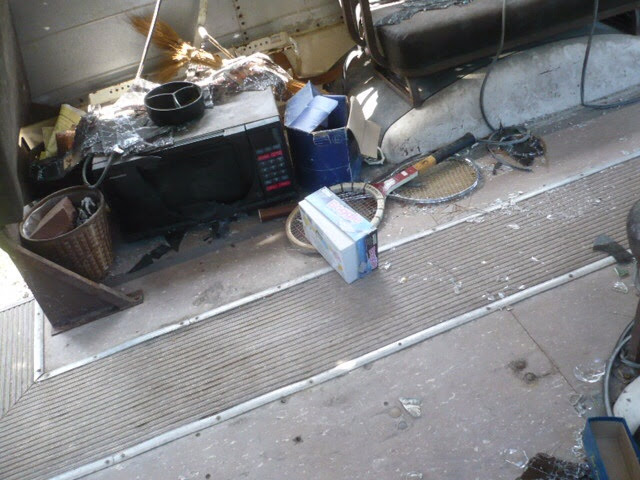 Apparently in Gettysburg kids like to play tennis and Boggle while using the microwave on their way to school.
I finally got gas and found Gilley's but they were CLOSED. Suckers.
I continued on to the Lincoln Diner in Gettysburg where I had desiccated pork loin and paper mâché green beans for lunch. I was nervous because I had to park where I could not see the Crazy Frog Machine (scooter) and was worried the local inhabitants might not be as honest as Abe.
I made it down to Rockville MD which seemed like suburban sprawl.

Made it to Jim's house and scootered up his steep driveway. Had an IPA beer at his house and went to a Thai restaurant, which was great, particularly the dessert of mango and sticky rice. I ate a lot. I think I am burning a lot of calories on the scooter. On high-speed two-lane freeways I am often in mortal terror as I come up to blind turns with semis hurtling past me in the other direction. I concentrate on "riding my own ride" which makes sense, especially since the scoot is loaded down and has a higher center of gravity than it would without all the stuff in the top case. I rely on the integrated lighting in the top case to give me better visibility. A driver behind me should be able to see my top case running lights and just above that my yellow helmet with a reflective bee decal. Safety first!. Bring 'em home alive..blah blah blah..super nerd-mobile.
After dinner we went to Atomic Billiards in Washington, DC, which looked very cool from their website but turned out to be a tavern with 5 crappy drink-stained tables and dirty pool balls. I didn't play long.
- Posted using BlogPress from my iPad
Posted by archeopterix at 4:59 PM