Savannah, GA
Took it easy in the morning then went down the road to a Yamaha motorcycle dealership. I ogled their scooters: the T-Max: 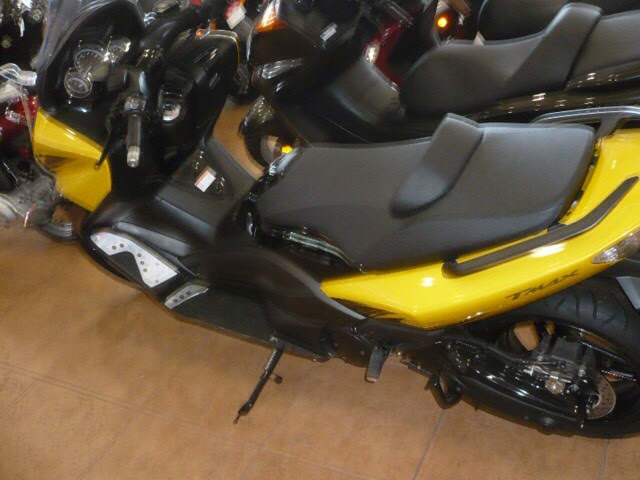 the Majesty, the Vino, the Zuma. They also had a little Honda Metropolitan.
They had a big touring motorcycle there called "The Venture", the equivalent of a Honda Goldwing: 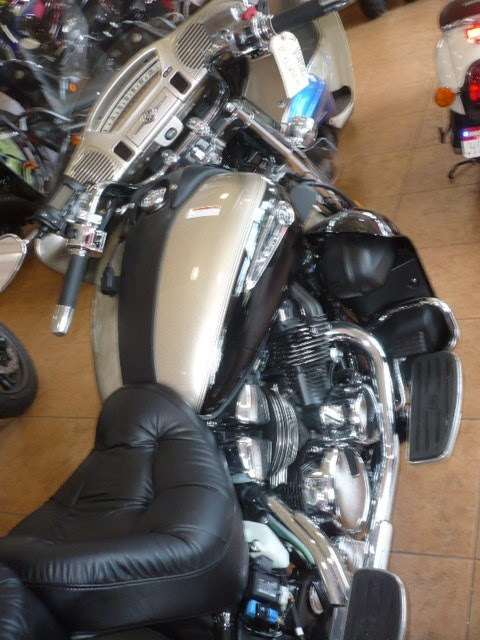 And the Goldwing itself, it's crazy, look at all the buttons, truly an armchair on wheels. Just needs a bedpan. 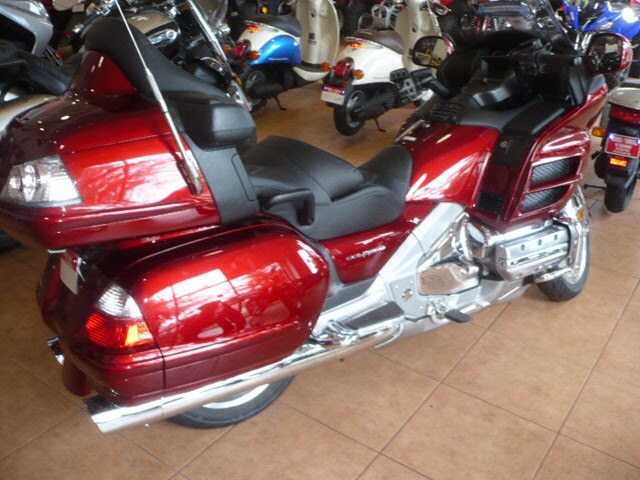 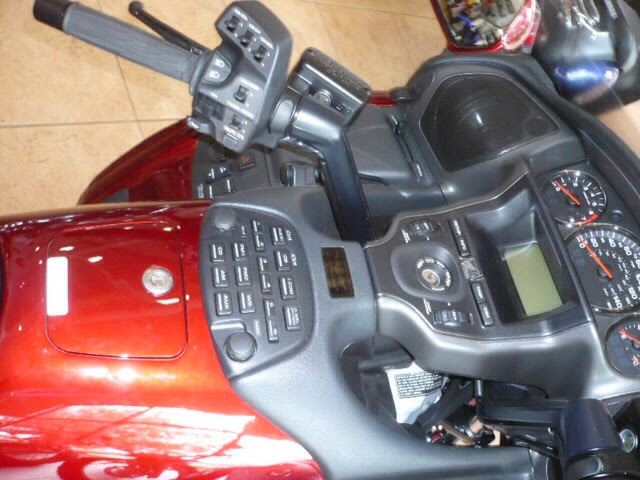 The salesman I talked to didn't seem into scooters too much. I was gabbing away "How big of an engine on the Venture, ya know ya gotta love the foot room on the T-Max, of course I installed footpegs on the Piaggio, but in the end storage is key right? How's the storage on those Vinos, not that good I bet..." He's just like "Zzzzz...no sale".
After that I got a salad and a baked potato at Wendys. Went back to the hotel and took a dip in the little pool. It was hot out. Took a shower. Ahhh..finally clean: 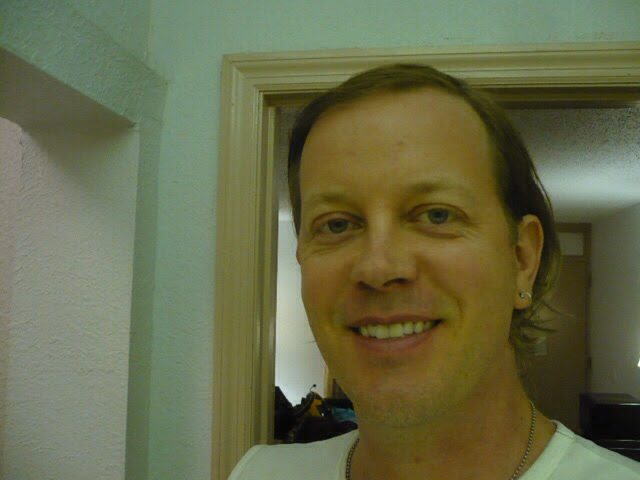 I headed out on the scooter to a restaurant called "The Pirate's House": 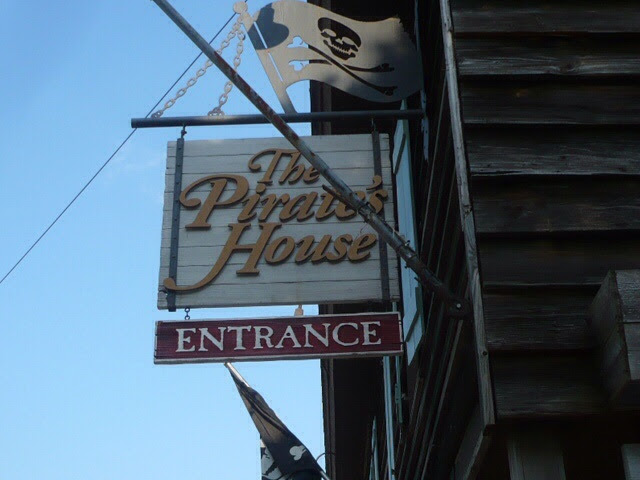 My family had been there 35 years ago on our trip to Savannah. This was one of the unsuccessful "Save the marriage" vacations. Despite that, I always remembered Savannah fondly, especially the people.
I don't remember much about "The Pirate's House" other than there it had a cool pirate-ey decor and they gave out lollipops when you left. So I wasn't sure how much it had changed.
People were taking photos of this guy: 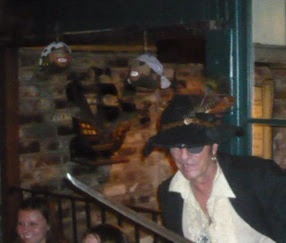 Someone asked him to smile and he said he that he was smiling.
It was crowded so I ate at the bar. Can't have booze since I'm on the scooter so I had a coke. I ordered the "Shrimp and Grits" appetizer and nothing else. It was the right choice because it was a lot of food. Very very good too: shrimp that tastes like shrimp and not bland nothingness. A sherry cream sauce with cooked red peppers. I was full after eating it.
Then I went for a walk to see some of downtown Savannah. This is a street paved with seashells: 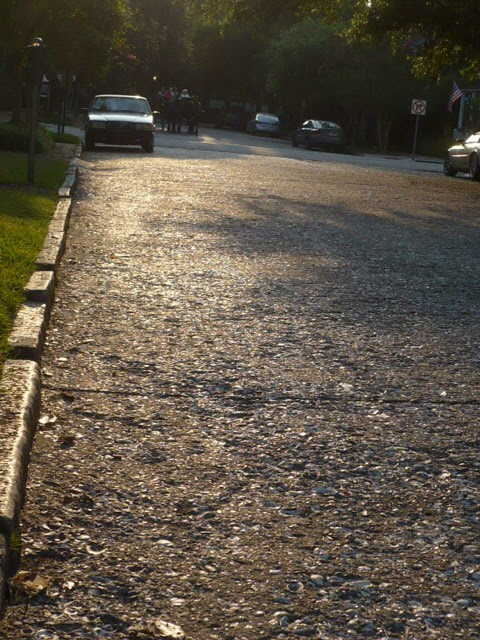 Here's a metal plate that was in the street: 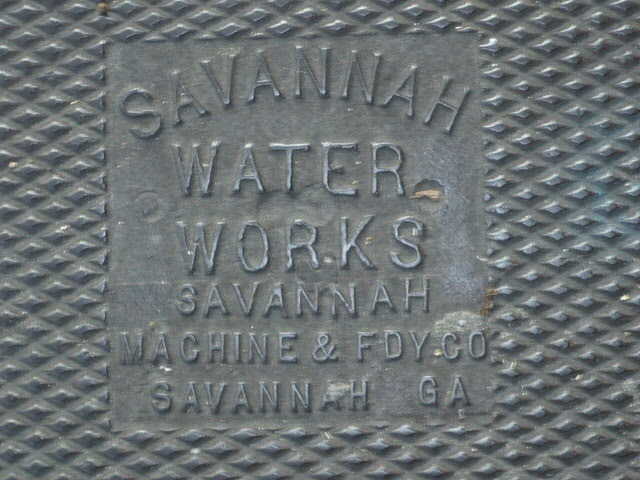 The College of Art and Design: 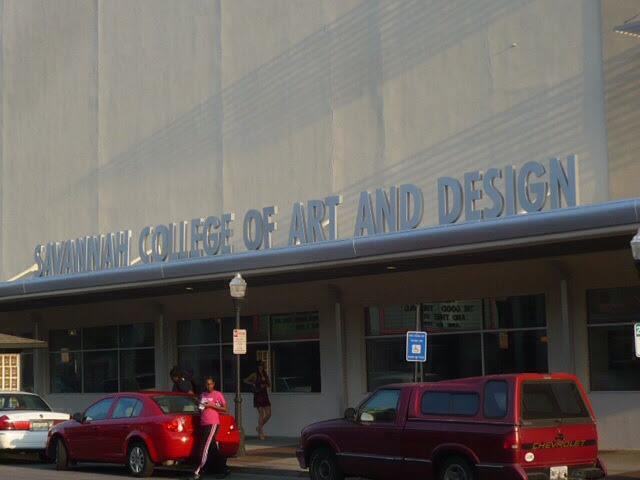 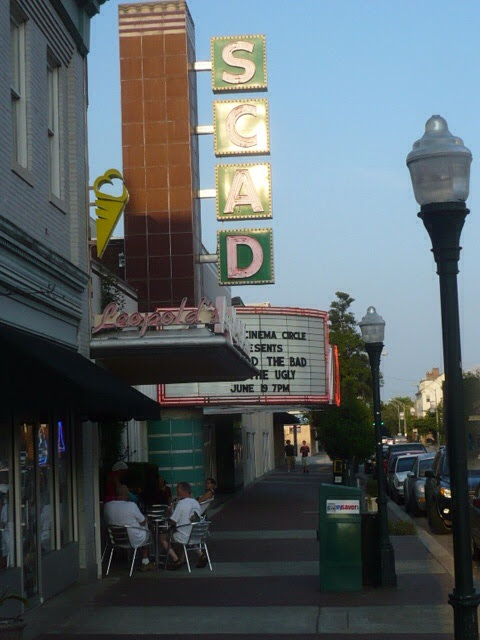 The cool bus stop signs they have (note it is not a giant sign, it's only about 8 inches across, I'm just close-up on it. This building seemed a little Bauhaus: 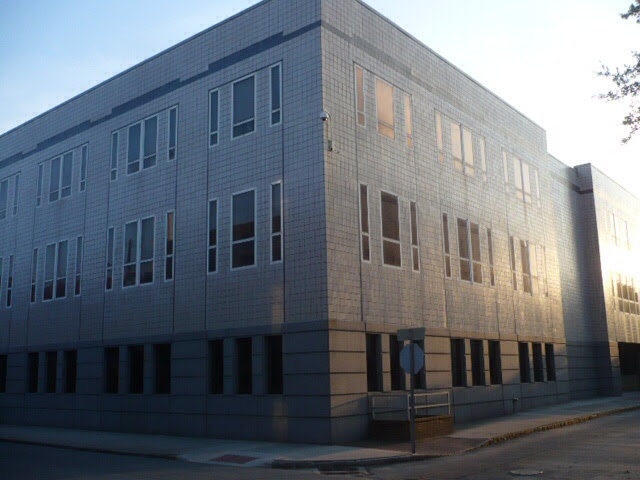 There was more deco-style stuff than I had anticipated. Not this though: 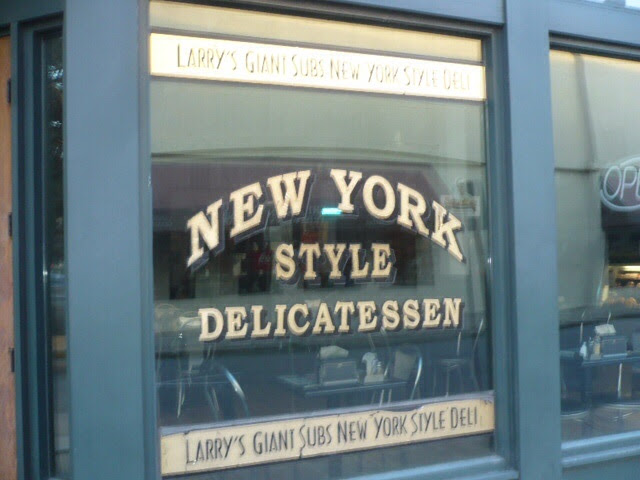 More like a "Gangs of New York"-style delicatessen.
I liked the proportions on this Goodwill store: 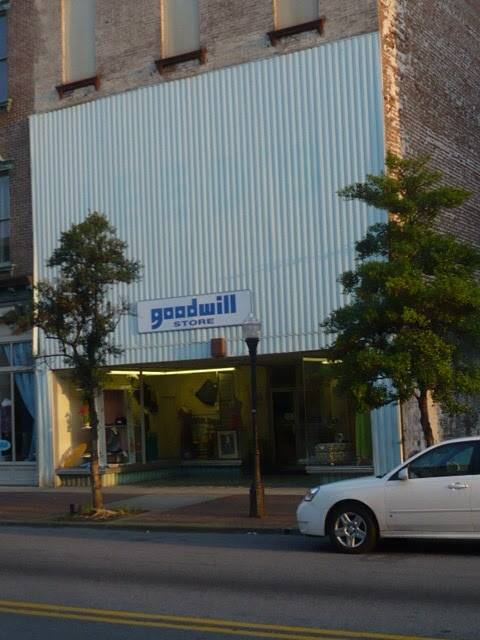 This was a memorial to Haitian soldiers who had defended Savannah against the British: 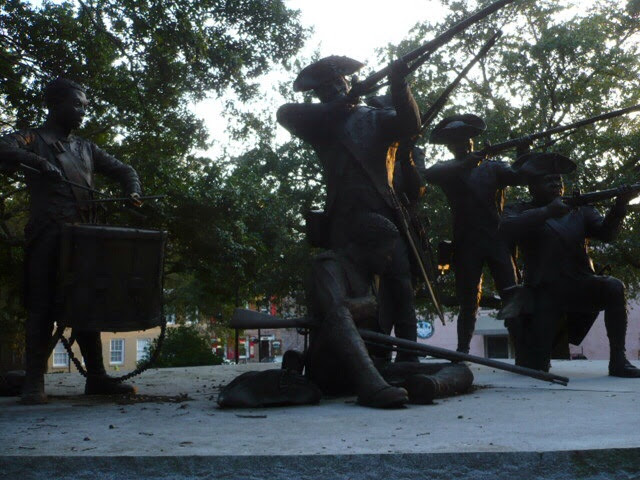 The sunset on the river was nice: 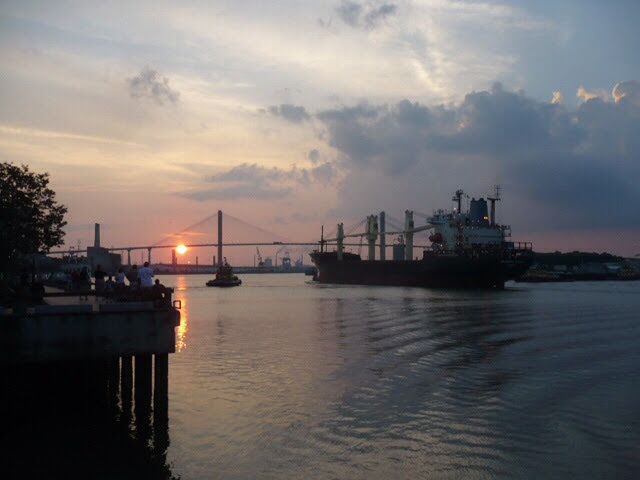 At 9pm it was still 87 degrees. I rode towards Tybee Island but it was getting dark so I turned back.
These are the pretty pictures of Savannah. Overall though it was very touristy and there was a significant homeless population. I like the history, but Savannah reminded me a little of Asheville in the "boutequey-ness" of some of the streets. An Urban Outfitters, cheap t-shirt shops selling Corona tank tops, hey, sounds like NYC.
I went back to the hotel and headed out to the Southside Billiard Club. Southside had a bunch of "Robertson" tables made in Tampa, FL. The owner, Jim Laufenberg, explained that the Roberston factory had burned down and the company went out of business: 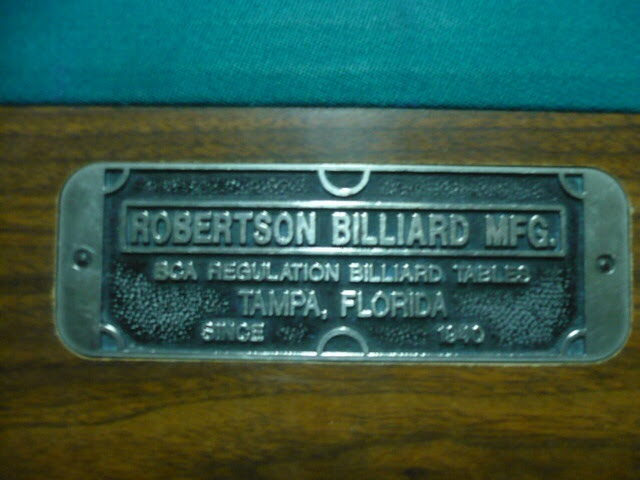 Also there was a 5' x 10' Brunswick snooker table: 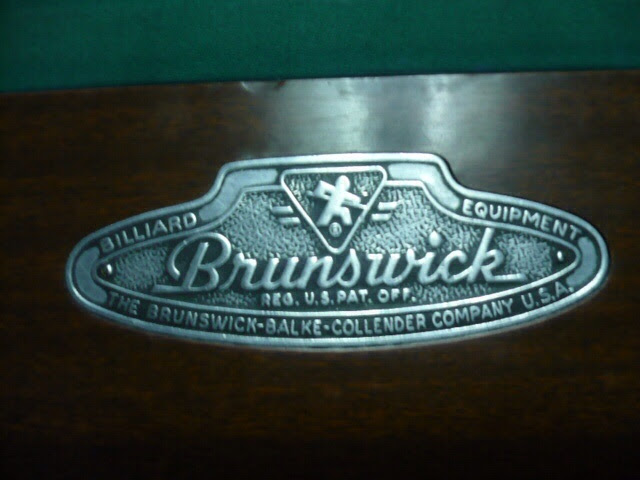 Let me tell you, it is a ton easier to play on a 5' x 10' American table than a 6' x 12" British one.
The balls being used were a mixture of standard snooker balls (for the reds) and what appeared to be 2 1/8" pool balls. Check out how the orange "5" ball is bigger than the red balls: 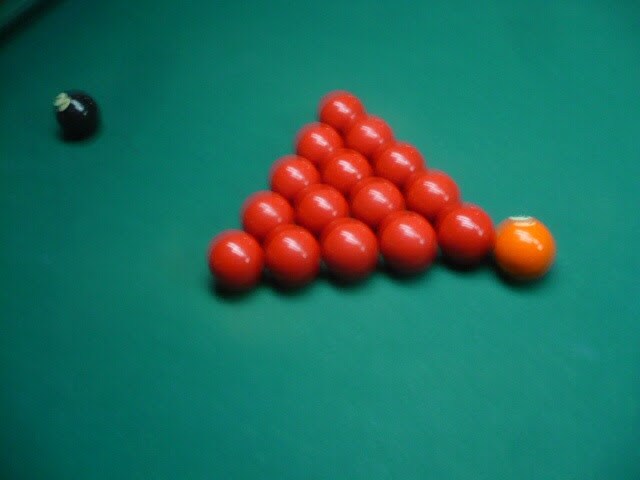 Alison Fisher would not approve.
Jim took a photo of me in front of a Southside sign: 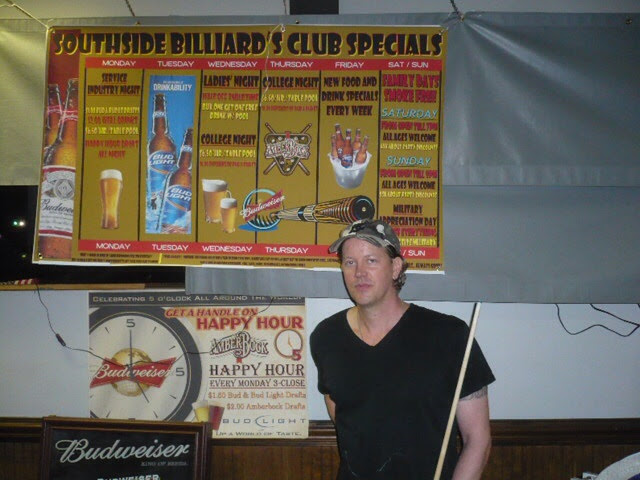 I had a great time there. The only thing that was tough to deal with was the second-hand smoke. Reminded me of Monday afternoons at Westside Bowling Lanes in Toledo, OH when I was a kid. You'd leave that place with your growth plates not only fused shut but also stained with nicotine.
Got back to the hotel very late, and I'm leaving early tomorrow.
- Posted using BlogPress from my iPad
Posted by archeopterix at 4:53 PM